In 1996 Swedish Foundation for Small Business Research (FSF) and the Swedish Agency for Economic and Regional Growth (Nutek) instituted the International Award for Entrepreneurship and Small Business Research. In 2008 the Research Institute of Industrial Economics (IFN) joined FSF and Nutek to become the third partner in awarding the Prize. 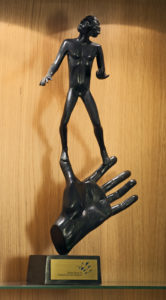 At the same time the Prize sum was doubled to 100,000 euros, the name of the Prize was changed, and the procedure for nominating and evaluating prospective Award Winners was strengthened.

The partnership of IFN became possible thanks to a generous donation by the Swedish entrepreneur and industrialist Rune Andersson and his holding company Mellby Gård AB.

Small Business Economics and Springer Publishing have entered into an agreement with the three organizations behind the Global Award for Entrepreneurship Research and will publish the presentation of the Award Winner as well as the prize lecture. A more detailed description about the partnership can be found in the article “In Partnership with The Global Award for Entrepreneurship Research” by Editors-in-Chief Zoltan J. Acs and David B. Audretsch published in Small Business Economics.

A discussion about the evolving domain of entrepreneurship research written by Bo Carlsson, Pontus Braunerhjelm, Maureen McKelvey, Christer Olofsson, Lars Persson and Håkan Ylinenpää can be found in an article published in Small Business Economics.

According to the statutes the Award should be given to “a person who has produced scientific work of outstanding quality and importance, thereby giving a significant contribution to theory-building concerning entrepreneurship and small business development, the role and importance of new firm formation and the role of SMEs in economic development.”

Hence, the prime reason for receiving the Award is outstanding scientific achievement. In addition, other aspects may be factored in. The ambition behind the Award is threefold:

(2) to further stimulate and promote research within these fields, and

(3) to diffuse the state-of-the-art research among scholars, policymakers, practitioners, and people involved in small business development.

A prize worthy contribution needs to be original and influential. One can think of many ways in which a contribution is influential, notably through its impact on subsequent scientific work (normally by virtue of the scientific work per se, but sometimes through the organization of large research programs), by furthering entrepreneurship as a field (by creating important data bases, by starting influential journals, scientific communities etc.), by furthering entrepreneurship education and training at the academic level, and by influencing policy making and society more broadly.

Over a longer time span the Award winning contributions should reflect the extraordinary width of entrepreneurship as a social science field, spanning the entire spectrum from anthropology to theoretical microeconomics, and its methodological diversity.

Another dimension concerns what aspects of entrepreneurship that can be rewarded. Here at least three important aspects come to mind:

(1) the environment and the organizations in which entrepreneurship is conducted

(2) the character of the entrepreneur (personality, cognitive and affective aspects), and

All three aspects are highly relevant, and a scholar may be rewarded for contributions to any of them.

A number of distinguished entrepreneurship scholars are invited in May–June every year to nominate candidates. The invitation is extended to:

Self-nominations are disallowed, but members of the Prize Committee have the right to nominate candidates. These nominations provide the first step in the creation of a list of potential candidates considered by the Prize Committee. It is at the discretion of the Committee to decide which candidates should be targeted for a more thorough evaluation. A candidate can be short-listed for several years and therefore during that time be regarded as a potential candidate for the Award.

It is imperative to ascertain a high-quality selection process characterized by continuity and robustness. Therefore, the eventual selection of the Winner is based on thorough evaluations and comparisons of a number of worthy candidates, and the pool of candidates from which the Winner is selected must be reasonably stable, reflecting the long-term efforts of the Prize Committee.

All short-listed candidates are thoroughly evaluated by a specialist in the candidate’s field. These outside evaluations are strictly confidential. The evaluation of a Winner by the commissioned expert will form the basis for a published presentation of the Winner co-authored by the outside expert and the member of the Prize Committee who is most familiar with the Winner‘s work. In some cases the commissioned expert may be a member of the Prize Committee, but this is likely to be an exception rather than a rule.

The Award Winner is announced during spring. After the announcement the Award Winner is requested to prepare a publishable Prize Lecture that can be delivered at the official Award ceremony in Stockholm around May 15th.

The Award is typically conferred by a cabinet minister, a member of the royal family or some other distinguished public personality. The Winner is then expected to tour Sweden during the Entrepreneurship Week, the annual seminar tour of Swedish university cities taking place during the week when the Award is conferred, i.e. around the 15th May.

Carl Milles and the statuette

Carl Milles “The Hand of God” was one of Milles’ last works before his death. Originally, Milles created it to honor the Swedish innovator and entrepreneur C. E. Johansson. The original still stands in Johansson’s hometown of Eskilstuna. Read more